3 INTERESTING FACTS ABOUT THE BIRTHSTONE FOR AUGUST THE PERIDOT 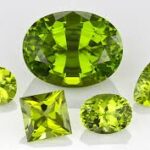 3 INTERESTING FACTS ABOUT THE BIRTHSTONE FOR AUGUST THE PERIDOT

He stole eyes from a milk-glass moon,
From drops of peridot scattered at sea,
Hidden beneath a moon-shadowed ruin
Or from what rare ocean his being might be.
Unknown

Known sometimes as ‘The Poor Man’s Emerald, peridot is an olivine, magnesium-rich mineral of pale, translucent green. Although uncertain, some suggest that its name originates from the Anglo-Norman pedoretés meaning ‘gem’.

It is one of the only gemstones than occur in a single colour, although the intensity of green depends largely upon the amount of iron contained in the crystal structure. So, although the colour of the stone is always green, the shade can range from yellow, to olive, to dark green (which is the most valuable).

Peridot is commonly found in mafic and unltramafic (low silica, high magnesium deposits), is often found in lavas and has even been discovered in the cores of meteorites. Although olivine is rather abundant, peridot is actually quite rare due to the mineral’s chemical instability on the Earth’s surface. It is mined all over the world, in Egypt, North America, South America, Africa and Asia.

The Peridots’ Humble Beginnings in Jewellery

Historically, the volcanic island, Zabargard (St. John) near the Red Sea was the location of the most important peridot deposit. It was exploited for 3500 years before it was abandoned for many centuries. It was later rediscovered around 1900 and has been heavily exploited ever since.

Peridot has an ancient history and has been used for jewellery for thousands of years. It is a gemstone with a fascinating history, both in nature and culture. It is a gem especially connected with ancient Egypt, and some historians believe that the famous emeralds of Cleopatra were actually peridot gems. Peridot was also brought back to Europe by the Crusaders and was often used to decorate medieval churches. In ancient beliefs, peridot was a gift of Mother Nature to celebrate the annual creation of a new world. National leaders who publicly wore peridot were in former times thought to be gentle, fair and wise.

If the above profile wasn’t interesting enough for you, lets hear this month’s three interesting facts!

Ancient folklore suggests that peridot brings good luck and peace to the wearer.
-It was associated with the sun and ancient Egyptians believed peridot could ward off evil spirits. Over time, its been considered to have healing properties for the eyes, lungs, heart and stomach.

The Romans referred to peridot as ‘Evening Emerald’ because unlike the deep hues of emeralds. Peridot gemstones do not darken at night and still shimmer under candlelight.

There is no synthetic or manmade version of peridot, but imitations do exist.
-These are made from either glass or natural tourmaline.

If you’re loving this series and are keen to learn even more, or if September is you’re month, make sure to read up next time as Three Interesting Facts returns, starring the sapphire.

How can we help you at Helen Swan Designer Jewellery?

We specialise in of one-of-a-kind bespoke jewellery in a variety of colour, texture and cleverly engineered, sophisticated designs that Helen Swan Jewellery does so well.. We can help you express your unique style with our elegant designs as in bespoke Ruby Earrings. or an alternative to a diamond a ruby engagement ring.
We can even help you combine your old jewellery to create new preserving some of your old memories and giving them a new life.