3 IMPORTANT and INTERESTING FACTS ABOUT the GARNET in JANUARY

3 IMPORTANT and INTERESTING FACTS ABOUT the GARNET in JANUARY

By her who in this month is born
No gem save garnets should be worn;
They will ensure her constancy,
True friendship and fidelity.

3 Important and Interesting Facts about January’s Birthstone the Garnet

On these cold dull January days, if you live in Scotland that is, a birthday brightens up the month. Add a little colour to your life with a beautiful rich red GARNET oozing warmth and comfort like a good red wine.

This is the first of my monthly blogs for 2016 about stones representing each zodiac birth sign. This month is the GARNET for Capricorn but remember garnets can be also used as a second year wedding anniversary gift for the special partner in your life. So there are two good reasons to own a GARNET and did you know that GARNETS are good for your health….read on
If you would like to see more jewellery ideas or discuss a beautiful, unique bespoke piece of jewellery using a Garnet then you can contact me Helen@hswanjewellery.co.uk

Capricorn the birth sign for January
The rich red garnet for all you Capricornians, is thought to signify eternal friendship and trust and the word garnet is derived from the word granatum meaning seed. It is called so because of the garnet’s resemblance to a shiny red pomegranate seed.

The Garnet Is Not Only A Birthstone.

For all you newly weds, the garnet is not only a birthstone,
they are also used as a wedding anniversary gemstone and can be given as a 2nd year anniversary gift
Get hinting… beautiful Garnet Cufflinks and Earrings would make a lovely Anniversary gift for each other.

Garnets are very bohemian. The historical region of Bohemia, in central Europe (now located in the Czech Republic) was an early source of garnets of the highest quality. Now, in the county’s capital Prague, you can visit the Magic Garnet museum,  which features a large collection of historical and contemporary garnet jewellery.

Garnets Are Good For Your Health.

The third of our three important and interesting facts claims that garnets are good for your health. Garnets are thought to have healing properties credited with improving every sort of ill health from heart palpitations to heart disease. Another good reason to own some jewellery using Garnets.
They are also thought to offer protection against injury or death

Soldiers throughout the ages have carried garnets onto the battle field to protect them from their enemies. 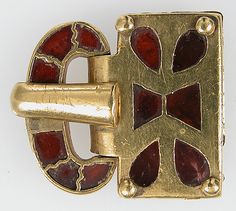 SOME GENERAL INFORMATION ABOUT THE GARNET

Garnets are a group of what is known as silicate minerals (a group of minerals containing ratios of silicon and oxygen) and have been used as gemstones since ancient Egypt.
Red garnets are classed as a semi-precious stones and were the most commonly used gemstones in the Late Antique Roman world in the Western Roman Empire (although they occurred then and now in a variety of other colours).
Garnets were especially used inlaid in gold cells in the Cloisonné technique, like this example of a Gold Buckle made in Constantinople 400-500 AD. It is an ancient technique for decorating metalwork objects using vitreous enamel in recent centuries and cut gemstones, glass and other gemstones in older periods. The resulting product is known as a garnet cloisonné.
As mentioned, the use of garnets in jewellery dates back to 3100 B.C, when the Egyptians used them as inlays in their own jewellery.
It’s most fruitful and important sources are Africa, Sri Lanka and India and they are obtained by mining.
If you would like to see more jewellery ideas or discuss a beautiful, unique bespoke piece of jewellery using garnets then contact me on Helen@hswanjewellery.co.uk or phone 01419595586

How can we help you at Helen Swan Designer Jewellery?

We specialise in of one-of-a-kind bespoke designer jewellery in a variety of colour, texture and cleverly engineered, sophisticated designs that Helen Swan Jewellery does so well.. We can help you express your unique style with our elegant designs of designer bangles, contemporary earrings, designer brooches, unique designer necklaces and much more.
Each piece is lovingly hand made in my Studio in the westend of Glasgow
Contact us today and allow us to help you solve you designer jewellery needs